To all Eanes family members: 2014 marks 300 years since our original immigrant, Edward, arrived in America. The documentation is in a book titled Cavaliers and Pioneers,  which I came across in the Library of Virginia, in Richmond. This finding is not mine originally; I was tipped off to it by someone on a message board and I have not been able to find it since. However, below is a copy of p. 142 of the book and it clearly states Edward’s name. His headright was given to …. In early Virginia, immigrants were granted 50 acres. However, many people gave their headright for passage to America and it appears that Edward did that. Within a decade he had married and within 15 years had substantial amounts of land in Chesterfield County. Later posts will document all that. 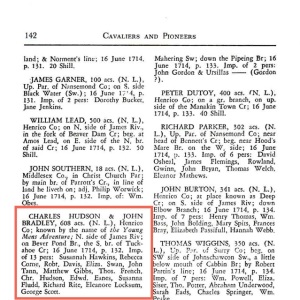 Charles Hudson and John Bradley received 608 acres on the north side of he James river in Henrico county. Their business or operation was called “Young Men’s Adventure,” and Edward (shortened to Edw.) is listed among 13 people who were imported. More research about the two men Hudson and Bradley may yield further records, such as where they came from in England and how they came up with this list of immigrants. Did they all come on one ship? Did they merely pay their passage? Lots of questions! More research on importation and headrights may yield some clues. A link to an article in the Library of Virginia on headrights can be found here.

The actual date of immigration is unknown; the date of June 14 is simply the date that the land was given and the transaction recorded. However, since we have no proof yet of any earlier date, this is the date that we will assume. . Happy 300th birthday Eanes!

Hi everybody! The Eanes Family website and blog has migrated to Word Press. Please keep an eye out for lots of new content.

Thanks to all of you who have been active here recently. It’s great to connect with other folks who share such an unusual last name.

Some more recent posts have raised the question of the origin of Eanes and whether it is just a misspelling. Years ago my mother, doing family research, said that she thought it was just a misspelling of Eames, a name found in England. Since Virginia was primarily settled by the English, that would make sense. My own research, however, has cast some doubt on this.

First, as we all know, our name is darn hard to pronounce and spell. We all know that. One branch of the family spells it Eans and that seems to be an old misspelling that stuck with some. I have come across distant cousins in West Virginia who spell it that way that that goes back many generations. They are the same family. But it’s a misspelling that has preserved a pronunciation. They have just simplified the spelling.

As I have researched other branches of my family tree, I often come across misspellings and mispronunciations. The farther back you go (prior to 1700) the more likely you will find these and the more likely they will stick. Vaden is a good example of this: it may have been a French name Vodin. What  find peculiar about Eanes is the way it was persistently spelled correctly over all the years with the only misspellings to be phonetic, like Eans. With a name like ours, you would assume that the more common mis-pronunciations–Eames, Evans, etc…, would have stuck at some point. But the spelling of the name has persisted and I find that intriguing. It is far more common for immigrants to adopt some kind of Anglicization of their name, rather than keep their original. It leads me to think that the spelling is correct and the pronunciation has been changed–from “Yawnish” which is now the Portugese say it, to “Enz” which is how we all pronounce it, with a long “e.” But this could be a completely wrong assumption, since it assumes that Edward and his sons chose to keep the spelling and change the pronunciation, rather than change the name completely.

I have somewhere, by the way, documentation about the name in Portugese, and it came from the Office of the President of Portugal, back in the 70’s. I’ll dig that out and post it. It says that the name is the Portugese equivalent of “Johannes” of “son of John.” It’s English equivalent would be “Johnson.”

Also, I have seen on Ancestry.com some family trees listing his origin as Kent. Is this conjecture or does someone have some hard facts?